”Some visuals lay scattered in memory…
In torrential rain a boy waits at the bus stop, mostly wet. There, a girl joins him in dripping wet clothes. Their eyes exchange whatever within a single moment…
An old man comes to see his daughter off. In the bus station his memories gallop back. Once, he too had started a travel from the same place.. During that journey got introduced to a girl in the train.., in front of him, drenched in memory, a man walks stooping, reaching the pinnacle of old age. Saliva flows from his mouth..
He was a rickshaw puller. He had the close resemblance of Rickshaw Thoma in my native town. Seeing him the man who came with daughter drives back to memory once again. He came in this man’s rickshaw.. Suddenly with heaviness of breath and excessive sweating he takes a tablet from pocket and places it under tongue… His face reflects the unrest of a heart patient.
Connecting these visuals I had written a couple of scenes. Just simply. Later,they were left in oblivion. Now after writing to make Pranayam I know they were the initial form of this creation. At a glance even I may not be able to find a direct link. But there are some strings somewhere inside.
Pranayam that you saw recently had been sown in me at some age and has kept growing with time. It’s preliminary/primary form had been
discussed with Lohithadas during the film Joker.
The plan was to make him write this. Then Mathews was not in and Grace was not a Christian character. At a later stage it became the story of two women and a man. But the writer in me did not have caliber to handle two women. Eventually it became two men and a woman.
Then too another huge problem came to the front- Indian moral codes and Christian morality. Women who have sexual interaction with more than one man are considered immoral. It was overcome when the concept turned it self into unconditional love.
When I wrote, without my conscious understanding, the writer in me traveled through varied paths. Two people who never thought of confronting each other in their later lives come together during the dusk of their lives. I have tortured myself thinking what these characters might be talking. I kept asking this to people of that age. Old husband and present husband. It was a mystery thinking what will they be talking in front of the woman who has known them in and out. Definitely both may not be having open minds. After Achutha Menon comes in, a micro view of Mathews’ behaviour reveals the beats of it. There is the dishonesty of keeping a jewel. At the same time, Mathews and Menon are best human beings in the world. When all three of them get into the lift, there is a butterfly accompanying them. While leaving Achuthamenon alone in the lift Mathews says: Send it out before the door closes. On writing this, I realized, this film is most innocent.
Beyond writing, Pranayam kept improvising throughout the shoot. Even a look had lot to say. Some scenes came in so abruptly. When the three characters travel together, Achutha Menon and Grace goes to the telephone booth to make calls. Next scene was unknown. The cinematographer who was new had tension. Then came the scene of Mathews sitting in the vehicle. I believe God has written it down.
After reading a quarter of the script saying that he would wish to do Mathews made me bow to the micro consciousness of the great actor Mohanlal. The least number of scenes, that too on a wheelchair; still Lalettan found the infinite possibilities of performance and took it ahead to the level of completion. While working with Mohanlal, I feel being complete in various places. The spaces that are vacant within me get filled up.
An actor who has taught himself and worked his way up, that is how Anupam Kher qualifies himself. Becoming Achutha Menon hence, was effortless for him. A Kashmiri Pandit converting into Malayali Menon is not trifle.
Where does life and drama meet? I know not. But when strange truths occur in life beyond imagination the limits between life and drama close in. The onlooker may feel psychologically displaced. When people respond to intense experiences in life we may feel it as drama. If there is drama in the film Pranayam, it is the default setting of life situations and experiences.
I who have not been in love or have been loved could write a film on Love, what else is more surprising and dramatic?’- Blessy

There are no reviews yet. 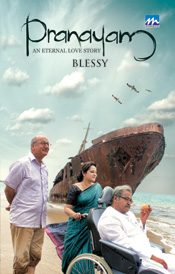