Half the world’s population—3 billion people-are below the poverty line, and 70 per cent of the world’s poor live in rural areas. Target 3 Billion encapsulates Dr A.P.J. Abdul Kalam’s mission to eradicate poverty from the world.
With 750 million people living in villages, India has the largest rural population in the world. Based on his Indian experience, Dr Kalam. recommends a sustainable and inclusive development system called PURA-Providing Urban Amenities in Rural Areas-to uplift the rural poor not by subsidies but through entrepreneurship with community participation. To make his case, Dr Kalam cites the examples of individuals and institutions, in India and from across the world, who, with an entrepreneurial spirit and a burning desire to make a difference, have successfully generated and tapped into the potential of the rural masses.
• Fabio Luiz de Oliveira Rosa changed the face of the rural district of Palmares, Brazil, by acquiring for the farmers access to electricity and water, which effect, combined with better agricultural methods, led to an increase in prosperity and stemmed the migration to cities.
• The 123-strong Magar clan owned Magarpatta, a 430-acre plot on
the outskirts of Pune, Maharashtra, In the 1990s, they organized and set up the Magarpatta city which is now home to over 35,000 residents and a working population of 65,000 and boasts of an IT park.
Target 3 Billion tells the story of the brilliantly envisaged global sustainable development system that is PURA, outlining Dr Kalam’s vision for every individual and organization-a vision that can create 3 billion empowered, productive and healthy citizens, and generate 3 billion smiles. 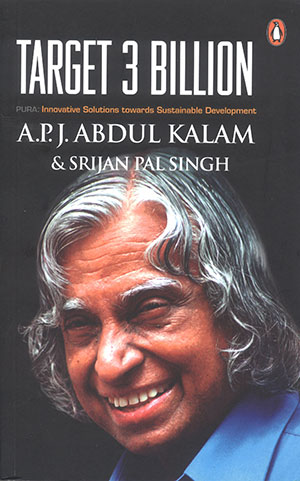