MY NAME IS RED

‘Fabulous … It is a wonderful novel, dreamy, passionate and august, exotic in the most original and exciting way.
Philip Hensher, Spectator
In Istanbul, in the late 1990s, the Sultan secretly commissions a great book: a celebration of his life and his empire, to be illuminated by the best artists of the day. But when one of the miniaturists is murdered, their master has
to seek outside help. Did the dead painter fall victim to professional rivalry, romantic jealousy or religious terror?
A thrilling murder mystery, My Name Is Red is also a stunning meditation on love, artistic devotion and the
tensions between East and West.
‘More than any other book I can think of, it captures not just [Istanbul’s] past and present contradictions, but also its terrible, timeless beauty. It’s almost perfect, in other words.
Maureen Freely, New Statesman
“Magnificent … This book might well be one of the few recent works of fiction that will be remembered at the end
of this century.
Observer
“A scintillating fusion of murder mystery, postmodernist >
fable and historical romance.
Scotland on Sunday 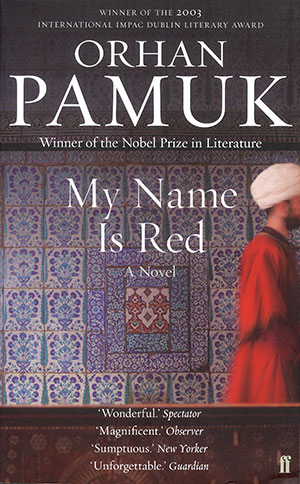