View cart “BECOMING” has been added to your cart.

THE NUMBER ONE INTERNATIONAL BESTSELLER

“Beautiful and extraordinary … so surprisingly candid, richly emotional, and granularly detailed that it allows readers to feel exactly what Michelle herself felt at various moments in her life.”
-CURTIS SITTENFELD, Vanity Fair

In her memoir, a work of deep reflection and mesmerizing storytelling, Michelle Obama invites readers into her world, chronicling the experiences that have shaped her—from her childhood on the South Side of Chicago to her years as an executive balancing the demands of motherhood and work, to her time spent at the world’s most famous address. With unerring honesty and lively wit, she describes her triumphs and her disappointments, both public and private, telling her full story as she has lived it—in her own words and on her own terms.

MICHELLE ROBINSON OBAMA served as First Lady of the United States from 2009 to 2017. A graduate of Princeton University and Harvard Law School, Mrs. Obama started her career as an attorney at the Chicago law firm Sidley & Austin, where she met her future husband, Barack Obama. She later worked in the Chicago mayor’s office, at the University of Chicago, and at the University of Chicago Medical Center. Mrs. Obama also founded the Chicago chapter of Public Allies, an organization that prepares young people for careers in public service.
The Obamas currently live in Washington, D.C., and have two daughters, Malia and Sasha. 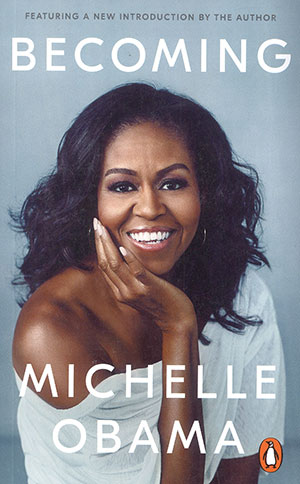